It's almost mid-June and I haven't posted a mixtape in well over a month. Here's some stuff I'm listening to:

Sorry there are a couple of missing links, but I just skipped them if it was took me more than a few seconds to find on Youtube or Google. I'm sure you'll find them on the webs somewhere though.

The day after the new album from The Drums is out, another Brooklyn band Here We Go Magic releases Pigeon (out June 8). I loved Fangela off of their last album and am really excited to see what they'll do in their follow-up.

The first single released from the new album, Collector, is probably the most played single in my iPod recently (along with Trashcan by the Delta Spirit). Definitely one of my go-to songs as the weather gets a little nicer. Also, their label is called Secretly Canadian - how can you not get excited about that?

Listening to the new Wintersleep album, which was released yesterday. Pretty solid so far... worth the purchase.

The band is letting people download the title track from the album. Get it here:

I'm sure you are already aware, but May is Zombie Awareness Month. Get your gray ribbons on & listen to this fine song by Stellastar*.

Just finished getting a little pre-week work done. Below some of the stuff I listened to. Happy Sunday!

To celebrate the end of this week I am ordering a double of working late, chased by a 3 hour drive to Edmonton. I'm in the midst of it. During these activities here's some music I have been (and will be) listening to:

Here's a Thursday Mixtape to kick off the new month. Sorry you have to do all the work to find these songs, but have I only have a couple of minutes to post what I'm listening to right goddamn now (i.e. copy+paste out of my playlist). Enjoy. 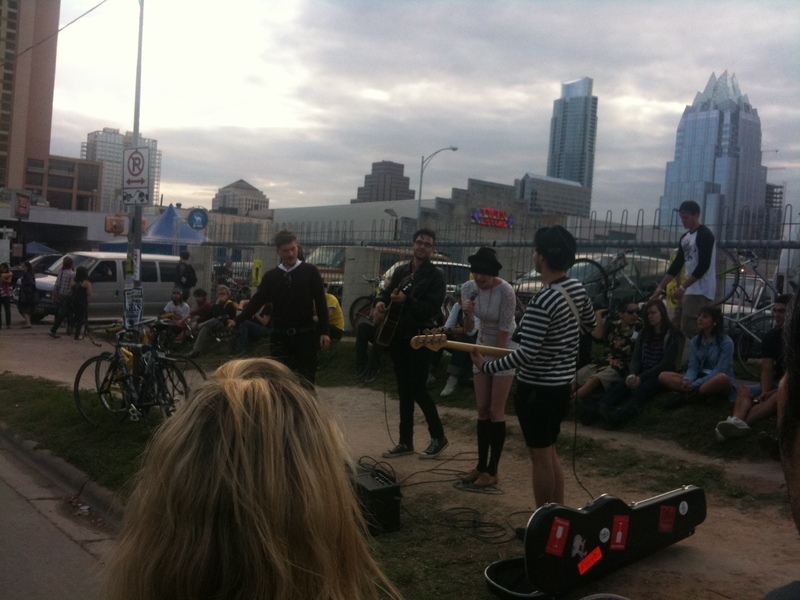 I have 4 SXSW tabs open in my browser, which I didn't want to close until I had a chance to write about my last few days at the festival. I'm not necessarily known for my memory so keeping tabs open helps me remember what's what. However, now that I'm back in Calgary, I have had trouble finding the time to blog, etc. I have a very compelling reason to be traveling again in mid-April so right now I'm working my ass off to make that happen.

I would like to come back later and review a band or two, but for now I'm just going to list out some of the bands that I was able to see on Friday & Saturday...Japandroids, The Drums, The Very Best, An Horse, Suckers, The Antlers, She & Him, Chico Mann, Washed Out, Real Estate, Yelawolf, Sleigh Bells, Bone Thugs & Harmony, Junius, the Uglysuit, Athlete The bolded acts were good to great. Sleigh Bells rocked their last song (Crown on the Ground, which was the only one I knew) but otherwise was pretty lame. Yelawolf was probably the most randomly entertaining (think 2010's bad-ass Vanilla Ice who throws out jeans, shoes that are in the shoebox, and full cans of Budweiser in to the audience) but were horrible musically. I had been listening to a lot of Uglysuit when I was in Brooklyn, so was really happy that they put on a great show... maybe my favorite set of SXSW. An Horse lived up to their name, Bone Thugs taught me a thing or two about different years in hip hop as well as dead rappers, and Athlete put on a really good acoustic show (which was probably good because the lead singer was drinking my water). I saw a bunch of other music in bars, restaurants, taco/beer gardens, and on the street (including one of the better bands I saw, who are behind Cousin It in the above photo... I can't remember their name). SXSW 2010 was a success. I will definitely be back next year with a few things in mind: - pace yourself
- ABC's of SXSW are Always Be Charging
- bring business cards even if you're just hanging out
- don't expect to be able to do everything
- expect dumb questions from the audience
- expect dumb answers from the panel
- don't stick around if the session you're in is bombing
- you will meet important people just standing around
- get a hotel downtown
- breakfast tacos are a great cheap meal
- Fogo de Chao is a great expensive meal
- Sunday is free breakfast day
- rsvp to the parties
- rsvp with a +1
- don't rely on the SXSW web site for all of the event info around town
- don't rely on my.sxsw at all
- prepare for low urinals
- eat whenever you can and drink lots of water
- tequila to start the day, not to end it
- don't bring red wine in the hot tub room
- just because it's Texas doesn't mean it doesn't get damn cold
- suits are overkill and douchey, no need to pack even as a precaution
- packing extra socks couldn't hurt because the ones you packed might have giant holes in them
- Franks, Buffalo Billiards, Driskoll, Chupacabra, Stoney's Pizza, Iron Cactus, and Imperia
- spend more time in South Congress
- make time for Uncommon Objects
- even though giving the cab to the white supremacists might seem like a good idea, maybe just take it yourself as they may have left some friends behind.
Yesterday, after a late start, I met up with my new friends from Wednesday's Fader Fort lineup. They wanted to see a separate band, but I was pleasantly surprised that Bowerbirds was about to start a set when I got there. After some initial sound problems, they had a great set. Then the group split apart a bit, a friend (Ashlea) and I went to go see the Delta Spirit at the IFC. They were filming something for the IFC channel to promote their new album, so we wanted to get in to see that. Ashlea doesn't have a pass, so she wasn't allowed in to the venue - however after a bit of fanangling we were able to get in and be part of a 30-person audience. Was very cool. After high on our luck, we decided to celebrate with some rapid-fire margaritas and tequila shots. It was about 4pm at this point. I was convinced that it would get the party started right and also called a pussy for trying to pace myself. Telling me that I can't do something is pretty much the best way to convince me to do it. With a good buzz on we headed down to the Fader Fort to catch most of the day's lineup. The highlight was the Columbian band Bomba Estero. We hung out with some of the local crowd afterwards and saw GZA from the other side of his venue's fence. Apparently Bill Murray was there, which is odd (I guss GZA and Murray were in a film together). With several more beverages in our bodies, we thought that for sure we'd be able to get Ashlea in to Stubbs to see Drive By Truckers, Band of Horses and Broken Social Scene. Everyone pretty much guaranteed that wouldn't happen as they were clamping down on wristbands and passes to the bigger shows. However, we got in no problem and was able to see all three bands perform great sets. Emily Haines and James Shaw from Metric came out for one song, which was awesome. I'm now at the hotel getting ready to see the Japandroids and start my Friday.